Lovebirds are known for their charming temperament, great adaptation to captivity, and mostly for their brilliantly coloured feathers. Evolving from their harsh environments of the different regions of Africa, they are beautifully decorated and provide an amazing social experience for owners. However, what if I was to tell you that you could easily fall in love with one particular lovebird that does not acquire the typical rainbow coloured characteristics?

Back Bay Veterinary Clinic in Boston, Massachusetts, rescued Rhea back in July, now famously known as the bald lovebird! Isabella Eisenmann, who has since adopted Rhea, loves to post videos and pictures of her to keep the fans up to date with her daily activities! She is so popular, with now 385K followers, who even send her knitted clothing to keep her nice and cosy!

At first, Isabella explained that there was a lot of controversy over Rhea’s appearance with public concern, however Rhea suffers from a condition called Psittacine Beak and Feather Disease (PBFD). The virus is caused by a differently structured DNA strand, causing infections primarily in young birds. Psittacine species are most susceptible, with the virus affecting the liver, brain and immune system. These symptoms include loss of feathers, development of abnormal feathers, overgrown/ abnormal beak, and occasionally lesions on the nails.

Rhea’s owner even answers any questions that her fans have, describing what Rhea’s skin feels like, daily care and more information on the disease. In one post, Isabella says “Rhea is in charge of taking care of her own skin and she does her job pretty well; she preens herself all day everyday.” She continues to say that Rhea’s skin is already very sensitive, and does not add anything to mess with it, and explains that even if Rhea has no feathers, she shows no self-awareness of the disease as she expresses natural behaviour like other birds.

Unfortunately for Rhea and other avian species affected by the virus, there is no known treatment, but experimental vaccines are being developed. However, this does not stop Rhea from flourishing! Isabella’s social media promotes information on the disease and raises necessary awareness. On her Instagram page you will also find hundreds of posts of Rhea wearing her sweaters sent from friends all over the world, even fan art, and daily posts of what Rhea is up to! Who would have thought that a nudist could be so adorable! 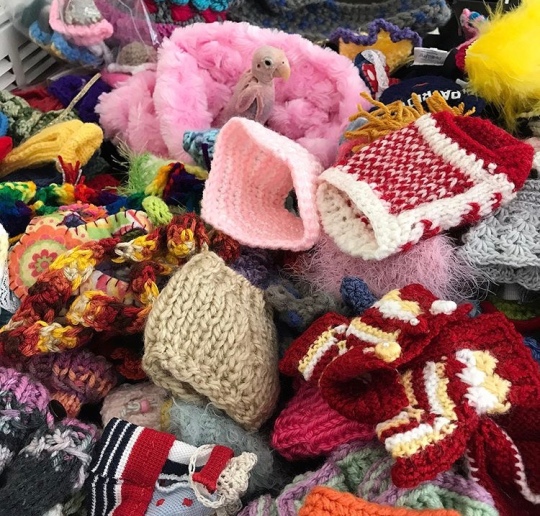 Rhea surrounded by all of her sweaters from friends! (Picture: Instagram page ‘rhea_thennakedbird’

Rhea even has her own merchandise (Picture: Instagram page ‘rhea_thenakedbird’

Hello visitors! My name is Kelly Shanahan, I'm 22 and a first time blogger. I love science and exploring new scientific discoveries. This page lets you uncover recent and interesting science articles, with an amusing and kooky style that will leave you wanting more. The most riveting and gripping facts of the science world that you can share with family and friends! View all posts by kellyscienceblogger

2 thoughts on “Rhea The Naked Lovebird”